Welcome to what is planned as a new weekly feature, where fellow gamer (and Chelsea fan, though we’ll let that slide) Ashley Harrison and I discuss the big topics of the week. For this inaugural article, we’ll be talking the future of how we consume our games, films, and other media. The bombshell drop of The Cloverfield Paradox on Netflix has brought up whether we’ll need anything other than our cosy bed and TV to watch the latest exciting releases in the days to come, and with Microsoft committing to first-party games coming on launch day to Xbox Game Pass, we could be moving that way. Keep reading for an in-depth discussion…

William Robinson: Hey, Ash! Thanks for joining me to talk (slightly) more professionally than we would normally. So, the whole Netflix strategy is on the mind of the mainstream right now. Microsoft impressed many by announcing first-party games will launch same day on Xbox Game Pass; and at the Superbowl, Netflix themselves shocked us all with a Cloverfield Paradox trailer that ended with it being available that same night. Let’s start with the latter – looking back after a few days, was it a good move?

Ashley Harrison: Yo Will, how’s it going? Looking back on it, I think in the case of both Xbox Game Pass and Netflix dropping The Cloverfield Paradox out of the blue, they’re incredible decisions for two completely different reasons.

WR: They’re different approaches, but to a same end goal; both are looking to push us to a streaming-dominant future. Can you see either of them making a major impact long-term?

AH: Xbox’s streaming service I can. Especially at the current price of £8 a month, I feel like that’s going to be an offer too good for most people to resist as we transition into a more digital than physical world. However, I’m not sure about Netflix. I feel like Cloverfield Paradox worked with this new model given it’s not exactly a huge name film, but for actual blockbuster films such as Star Wars, for example, a traditional release is the only thing I see Hollywood allowing; they earn WAY too much from box office sales to even consider allowing films to release on a streaming service.

WR: I think it would have been a bigger deal if Paradox was, to put it kindly, better than average. If that film had been at the quality level of 10 Cloverfield Lane, then it would have felt like getting a new cinema release at home. Instead, it ended up feeling like a B-movie that was being sold to us with clever marketing. On the Xbox topic, it seems like a good deal for players now; but if this works, we’re going to see publishers making their own services – look at EA Access! It’s already happening. The price is going to add up to have them all, just like with Netflix, Amazon, NOW TV and more competing with each other in the streaming space.

AH: Yeah, there’s that too. The clever marketing, mostly in thanks to the shock sudden release, helped to hide the fact that it just wasn’t that good of a film, and I feel this way it likely brought in a lot more viewers than it would if it had had a cinema release, as people more than likely watched it before reading any reviews that would’ve put them off. Every publisher having their own streaming service is my only fear to come out of this. I don’t know about you, but I actually rarely buy games brand new, unless I really want them, and each one seems to have a different publisher. The cost of having to pay for each service will add up to way more than the price of a game. However, there’s also the flip side that if you’re only interested in one publisher’s games, then I’m sure it’ll work out cheaper in the long run.

WR: We’ll be seeing more films try to copy the Paradox effect, I think, but Cloverfield was probably ideal for the treatment because of the whole mysterious marketing strategy that series uses. Personally, I get my games new and physical when I can. I am a big physical media fan, but I can see them going the way of magazines – less room for the general product, but a remaining market for those that embrace the beauty of a tactile, well designed publication (or, in this case, game package). We always talk about this being the “final generation of consoles” before the next gen proves us wrong, but whether it actually happens this time is yet to be proven.

AH: I don’t think there’ll ever not be a next generation of consoles, unless the game companies go the way of the PC, and just provide an upgradable box, although I doubt that will ever be the case. What I don’t doubt though is the way in which we interact with the consoles will change. I do think we’re not too far from an all digital future, where consoles will essentially just be boxes with a hard drive in, and we’ll be streaming or downloading games as the internet gets faster and faster for customers. I think Game Pass and EA Access are just the beginning of that step.

WR: Yeah, Steam Box went well, eh? In all seriousness, I’m not against the idea of being able to stream the majority of games – as long as there are still physical editions, at least for the bigger releases. One part that does worry me is how these monthly prices are unlikely to include those pesky DLC and microtransactions; the issues there will only be exacerbated as publishers look to them as the main source of income. What about you? Would you be on board with a streaming future?

AH: I’m not sure there would even be physical editions of bigger releases, as I’m sure a console with a focus on digital games would just ditch the disc drive altogether. As you said, the monthly prices probably wouldn’t include DLC or microtransactions either, and with the amount of games now launching with one or both of those, it could end up being even more expensive than anticipated. There’s nothing to stop companies increasing subscriptions prices, either, because if it’s a digital only future then you have no other choice. I’d personally never be happy with all digital. Whilst I appreciate the convenience of having the games all stored on your console without having to switch discs, or having thousands of movies on your phone, there’s something about the feel of holding a new game in your hands (and that iconic smell!) or going to a cinema to watch a newly released film that you just can’t quite beat. 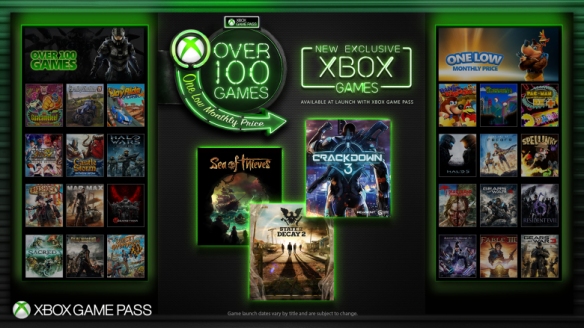 WR: Definitely – I adore the event of going to the cinema, but we’re edging towards a future where we all just consume everything at home… To finish up, let’s bring it more short term. Xbox Game Pass in 2018 – would it convince you to think about playing Xbox One titles you wouldn’t have otherwise? The lead games aren’t huge names like Halo this year, so it could be viewed as a conservative way to test a risky strategy.

AH: For £8 for a month, I’m sure I’ll pick up a subscription at some point to try out games on the service, however I don’t think I’ll keep the subscription running; if I find anything I like I’ll just purchase it rather than rent it, as that’s just how I am. It’s a risky strategy to try it this year rather than say last from what we know at the minute, however I’m sure Microsoft are going to retrospectively add their games to the service, to make the price more worth it. Plus, we don’t know what anyone has up their sleeves for E3 yet, so Microsoft could easily be sitting on a huge game, just waiting for the right time to announce it and release the service.

WR: Maybe they could drop Halo 6: Paradox at E3, and say it’s out that same night? Might sound ridiculous, but we have to be working our way towards someone trying a big move like that.

AH: I’m 100% sure that one company could pull something like that, as if I remember rightly someone within Nintendo has already said they’d love to do it, but I don’t think we’ll see it happen any time within the next 5 years, for fear of repercussions from retailers for the big games.

WR: As ever, time will tell for all these things. I’m really excited – with trepidation – to see how this goes. Honestly, I just want another (good) Cloverfield film, so it makes me glad to hear that the fourth film is coming this year. Thanks for talking and doom mongering with me about the end of physical media, Ash!

You can let us know what you thought about the new feature style below – or perhaps your own thoughts on the future of media distribution. Also, you can read our pilot “A Discussion” about The Last of Us Part II over at Tanuki Bridge, or read my review of The Cloverfield Paradox here, if interested. Either way, thanks for taking the time to read this article right here!